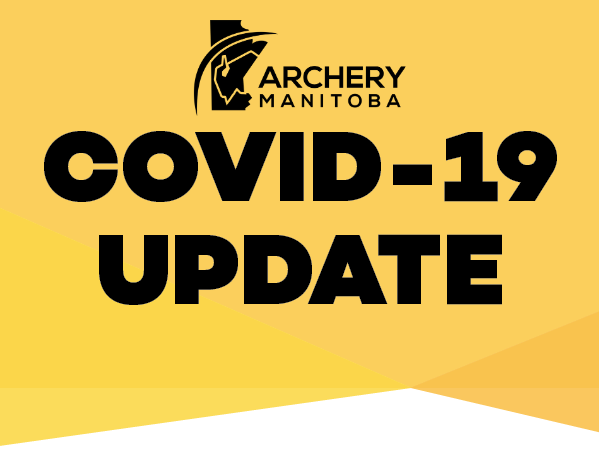 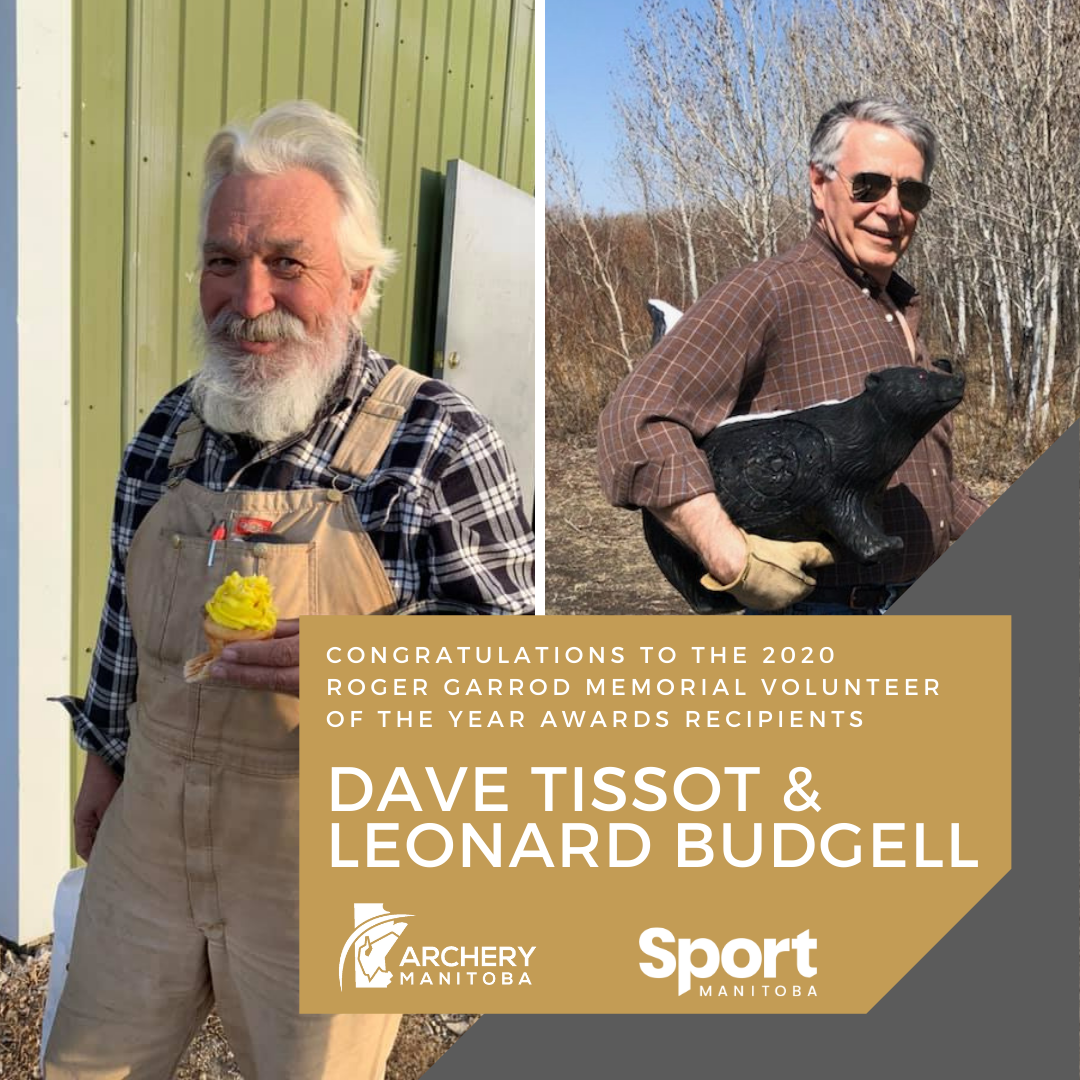 Congratulations to Flatlanders Archery Club Members Dave Tissot and Leonard Budgell on being named the 2020 Roger Garrod Memorial Volunteer of the Year Award recipients.  The Roger Garrod Memorial Volunteer of the Year Award recognizes the volunteer(s) who have contributed the most to developing archery with in the province of Manitoba during the previous year. While we have many dedicated volunteers in our community, the contribution made by both Dave and Leonard over the past several years has been nothing short of extraordinary. Since 2019 Dave and Leonard have worked countless hours rejuvenating the 3D and Field courses at the Archery Manitoba Sanford Range. While Dave and Leonard have had a tremendous amount of support from fellow club volunteers, they have been the driving force behind the vision of making the Sanford site an Archery Park that all our members can utilize, and be proud of. If you haven’t visited the site before, or it’s been a minute, make sure to join Flatlanders for a shoot night, or participate in an Archery Manitoba event this year to see the wonderful work that has been accomplished the volunteers. If you’re lucky, you’ll see Dave and Leonard out on the course, either working on a new shot or enjoying the trails with friends. 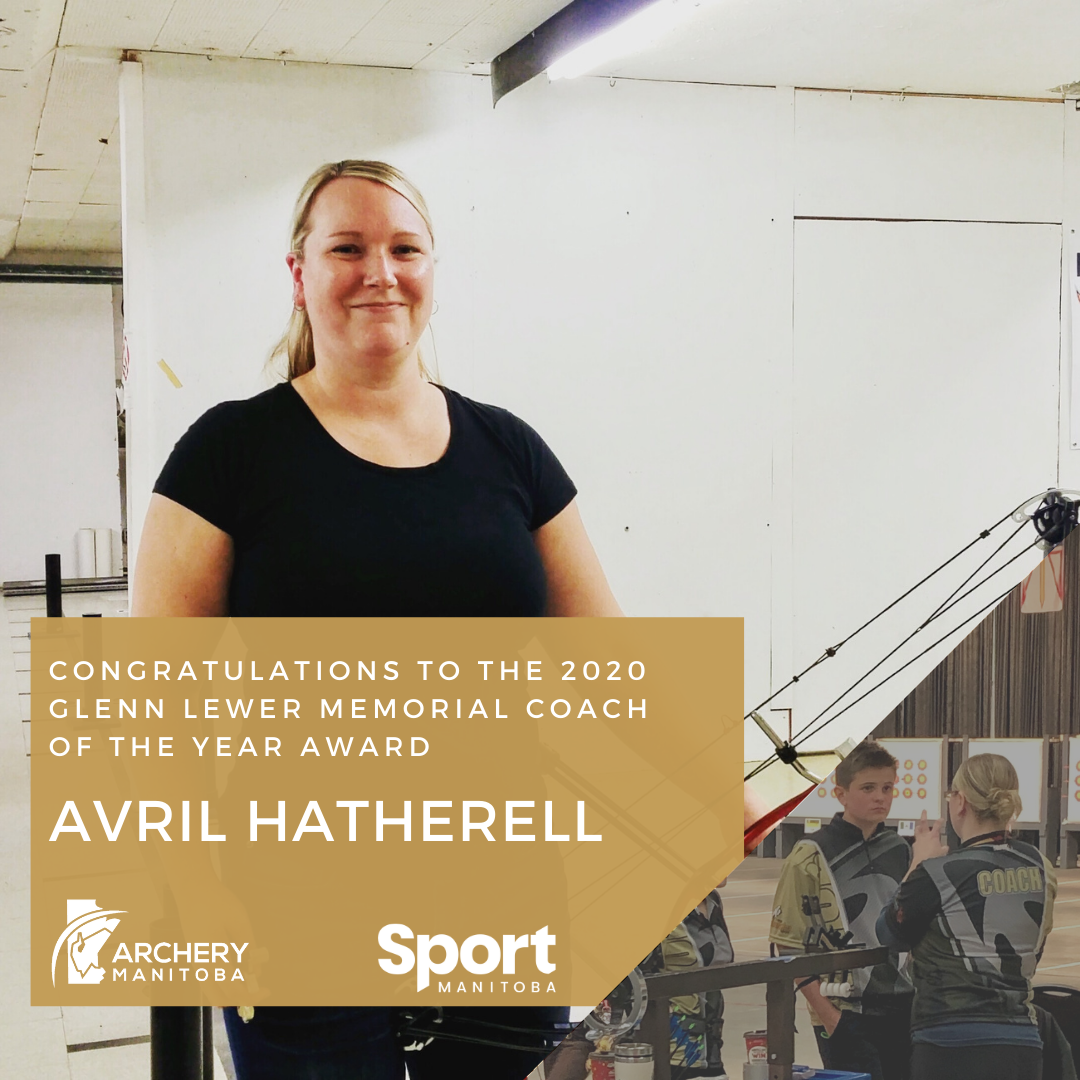 Congratulations to Team Manitoba Provincial Head Coach Avril Hatherell on being named the 2020 Glenn Lewer Memorial Coach of the Year Award recipient. The Glenn Lewer Memorial Coach of the Year Award recognizes the Coach who has contributed the most to developing archery in the province of Manitoba during the previous year. Avril was nominated by the numerous athletes that she has worked hard to develop into successful competitive archers. Avril has been involved with Team Manitoba as a coach since 2018, in this time she has co-led our Canada Games Team to Red Deer, introduced and co-facilitated the Manitoba Youth Games & Olympic Long-term Development Program (MYGOLD), and led our provincial target team in development and to national competitions. Avril’s passion for developing archers has led to one of our largest and most talented target teams in recent memory, which is bolstered by a strong group of up and coming compound and recurve athletes. Despite the challenges posed by everchanging restrictions in 2020/2021, Avril has remained dedicated to providing our athletes an opportunity to train and compete locally. Archery Manitoba and its program athletes are extremely fortunate to have Avril as one of our many dedicated coaches in Manitoba. 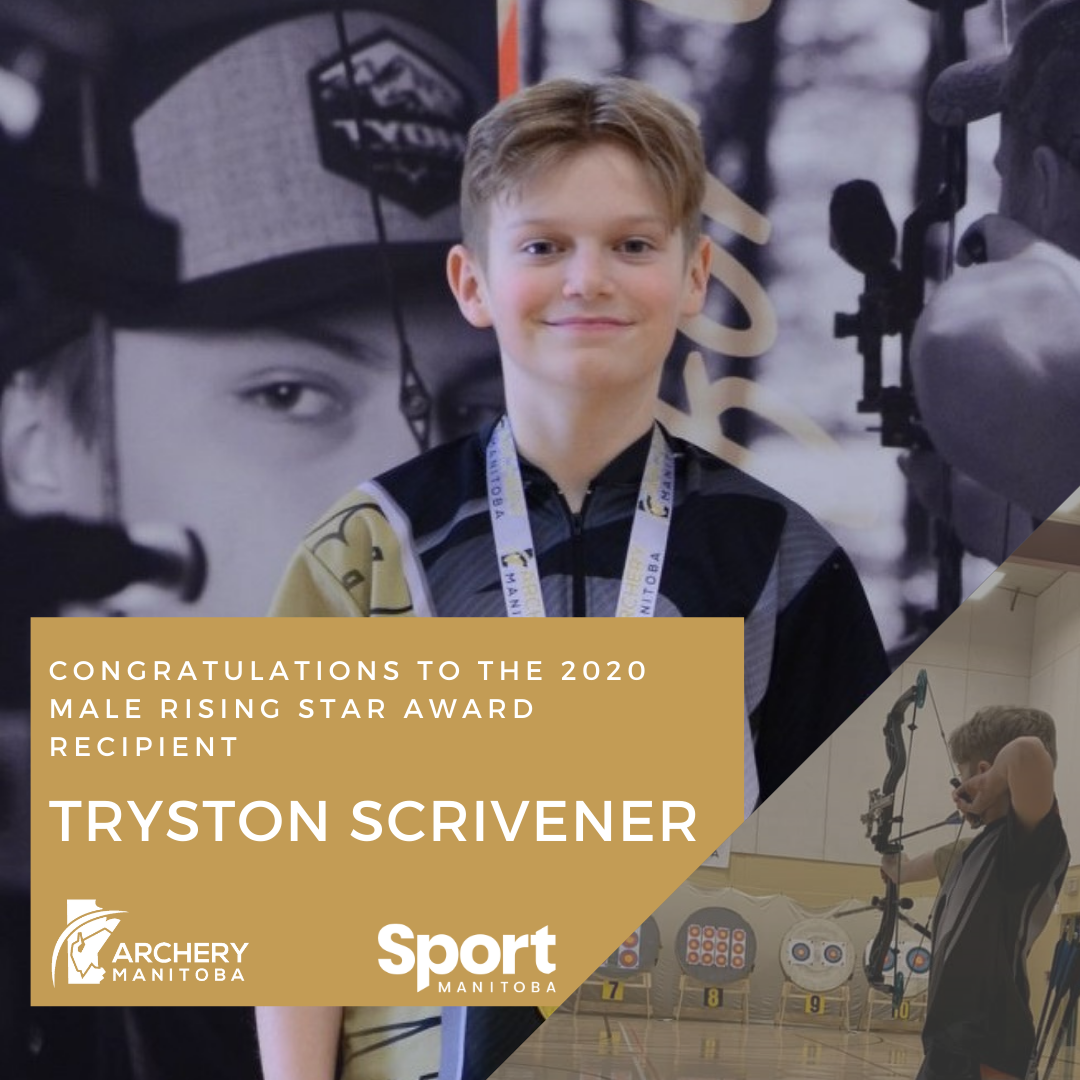 Congratulations to Team Manitoba Archer Tryston Scrivener on being named the 2020 Male Rising Star Award recipient. The Rising Star Award recognizes a male and female youth archer (Cadet & under) with the most outstanding development and achievement(s) in provincial, national or international archery in the past year. Tryston was nominated by his peers amongst a deep and talented pool of youth male archers in Manitoba this past year.  Tryston’s strong podium performances at the 2020 ISAA Pro-Am in Des Moines, Iowa, the Canadian Indoor Regional Championships, Provincial Indoor & Outdoor Championships, and the Manitoba Open have earned him this recognition. Archery Manitoba is looking foward to watching the continued development of Tryston, as he takes his skills to the next level! 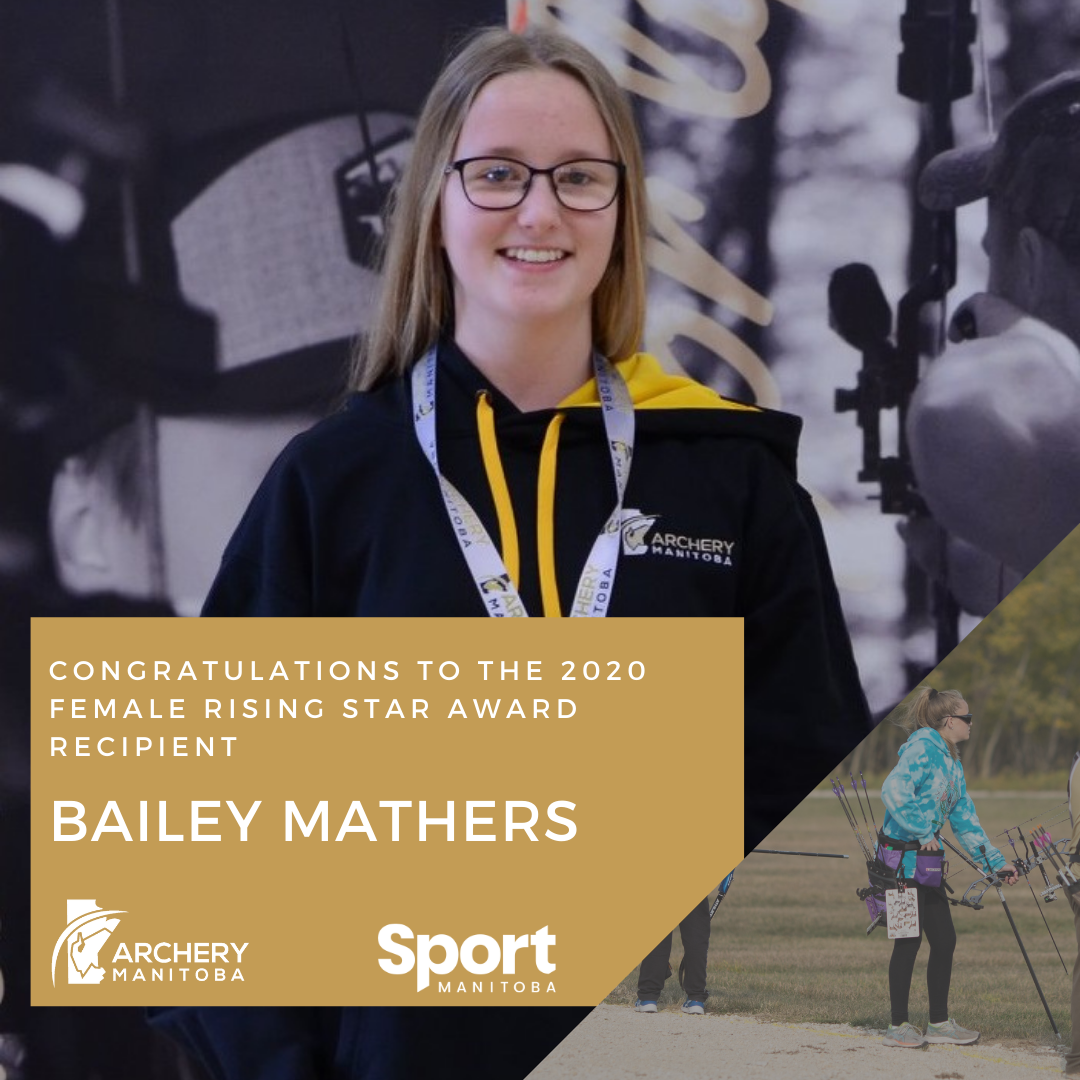 Congratulations to Team Manitoba Archer Bailey Mathers on being named the 2020 Female Rising Star Award recipient. The Rising Star Awards recognize a female and male youth Archer (Cadet & under) with the most outstanding development and achievement(s) in provincial, national or international archery in the past year. Bailey was nominated by her peers amongst a strong group of female archery athletes in Manitoba in 2020. Bailey’s impressive development toward making the 2021 Provincial Target Team, as well as podium finishes at the Canadian Indoor Regional Championships, Provincial Indoor & Outdoor Championships, and the Manitoba Open have earned this recognition.  Archery Manitoba is excited at the prospect of Bailey’s future accomplishments and the further recognition she can bring to high performance female archery in our province. 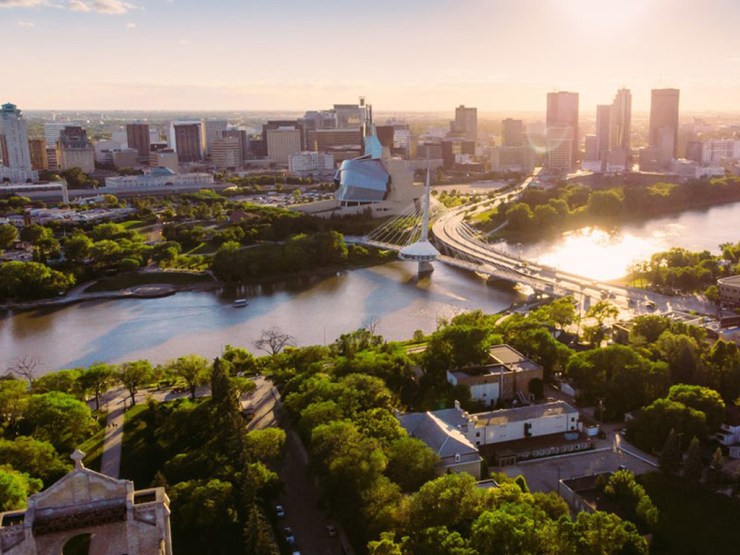 Archery Canada — in partnership with Archery Manitoba and Tourism Winnipeg, is pleased to announce that Winnipeg is a candidate city to host the 2025 World Archery Youth Championships, an event with an estimated $5-million economic impact that would bring nearly 600 athletes from more than 60 countries to the city for a week’s worth of high-level archery competition.

If Winnipeg is successful, the event is set to take place in late August 2025, with qualification rounds and early elimination rounds at Red River Exhibition Park, with the finalists shooting for gold medals at The Forks in what will be an exciting public spectacle.

“We are thrilled to get an opportunity to bid on the 2025 World Archery Youth Championships and host more than 580 athletes and their families in our city,” said Dayna Spiring, president and CEO of Economic Development Winnipeg. “Winnipeg shines in the summer, offering world-class attractions and a lively culinary and festival scene that will be the perfect backdrop to the final competition at The Forks — our community’s historical gathering spot right in the heart of the city.”

The economic impact of the event includes more than 3,600 room nights, catering and restaurant meals for athletes, combined with a hard-to-predict spinoff from parents and family members accompanying many of the athletes. Sportcal, a global sports economics consultancy, estimated the economic impact of a similar 2015 event in Denmark at US$3.2 million. Adjusting for inflation and converting to Canadian currency, the bid committee arrived at the $5-million estimate.

World Archery plans to announce which city has won the right to host by Dec. 31, 2021.

“Archery Canada is seeking to host more world level events in Canada for the development of the sport here at home,” said Al Wills, President of Archery Canada. “Archery has a great deal of potential and bringing the best in the world to Canada allows for those with an interest in the sport to see this level of competition up close, to be inspired and for the community at home to have the opportunity to support our talented athletes.”

Manitoba has a proud tradition of placing athletes on Team Canada for previous World Archery Youth Championships, and many have found their way onto the podium, including the 2019 junior silver medallist, Austin Taylor, as well as 2011 compound junior team champion Keenan Brown and 2006 champion Doris Jones.

The next World Archery Youth Championship is slated for August, 2021 in Wroclaw, Poland, while the 2023 event is headed to Limerick, Ireland.
-30- 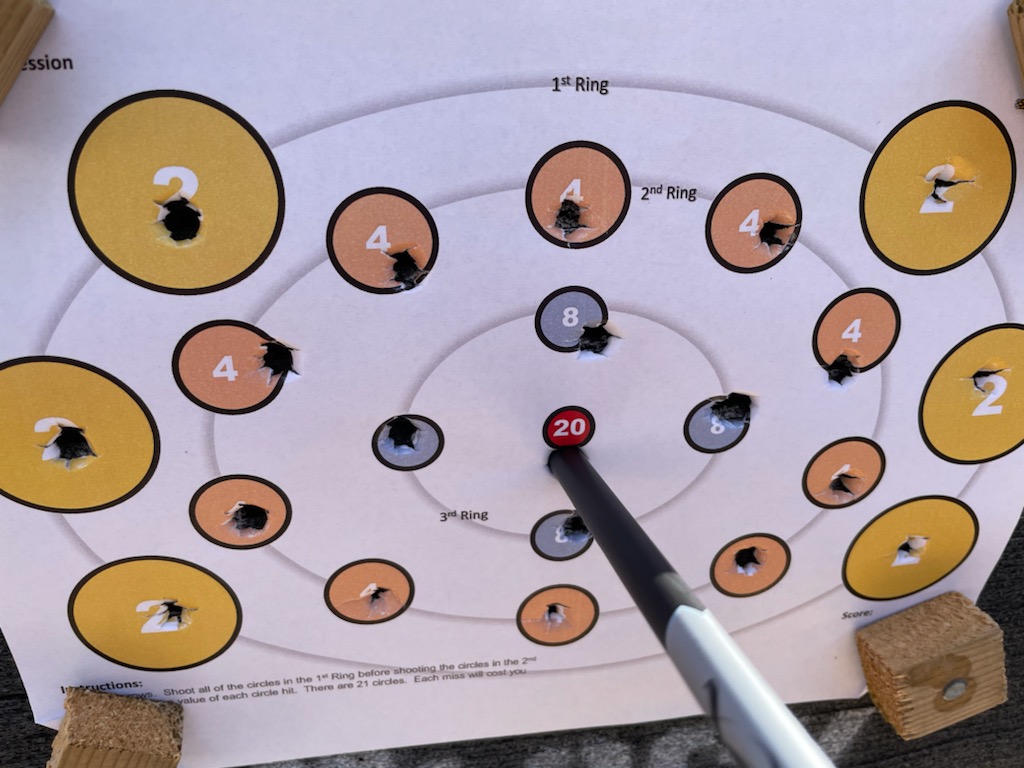 Week 5 scores for the Flatlanders @Home Challenge are now in!

There were no perfect scores in the 3Spot Target this week.  The battle for 3rd place came down to a single arrow with Chris Waterman besting Dan Hudson (by an X) and Arlan Flaming (who had 10x, but also had a ‘9’).  Top Barebow was Greg Rubel with a very impressive 149 9x. 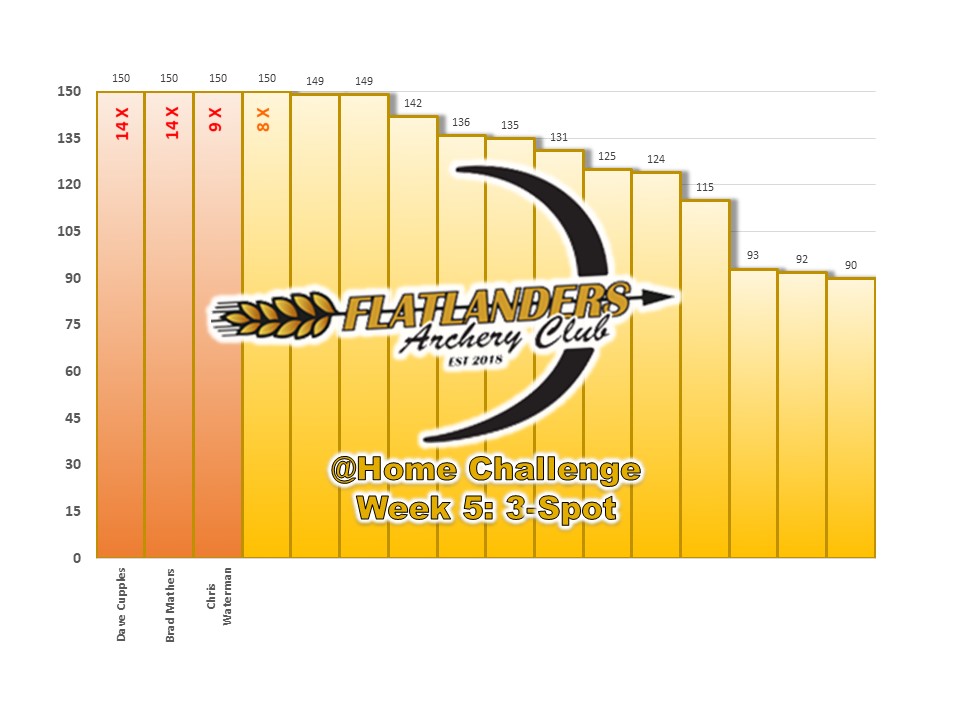 A few people have indicated that they enjoyed this week’s Challenge Target (Feedback is appreciated).  Two archers shot a perfect score of 104, and 3 archers tied for 2nd/3rd.  The official judge and jury has declared Chris Waterman as the 1st place winner (based purely on personal bias)! 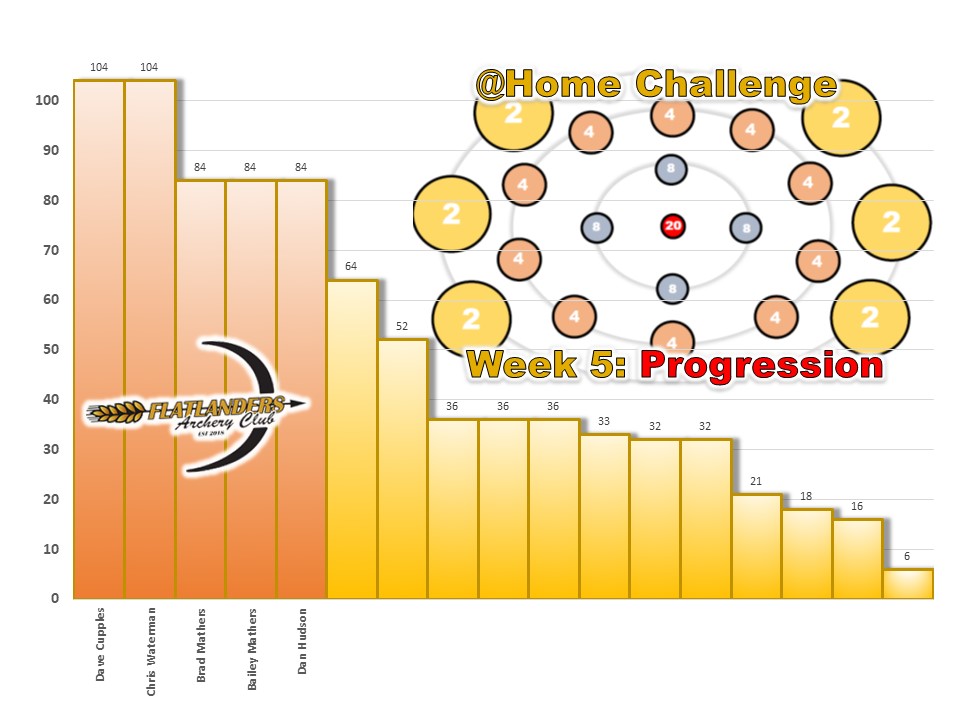 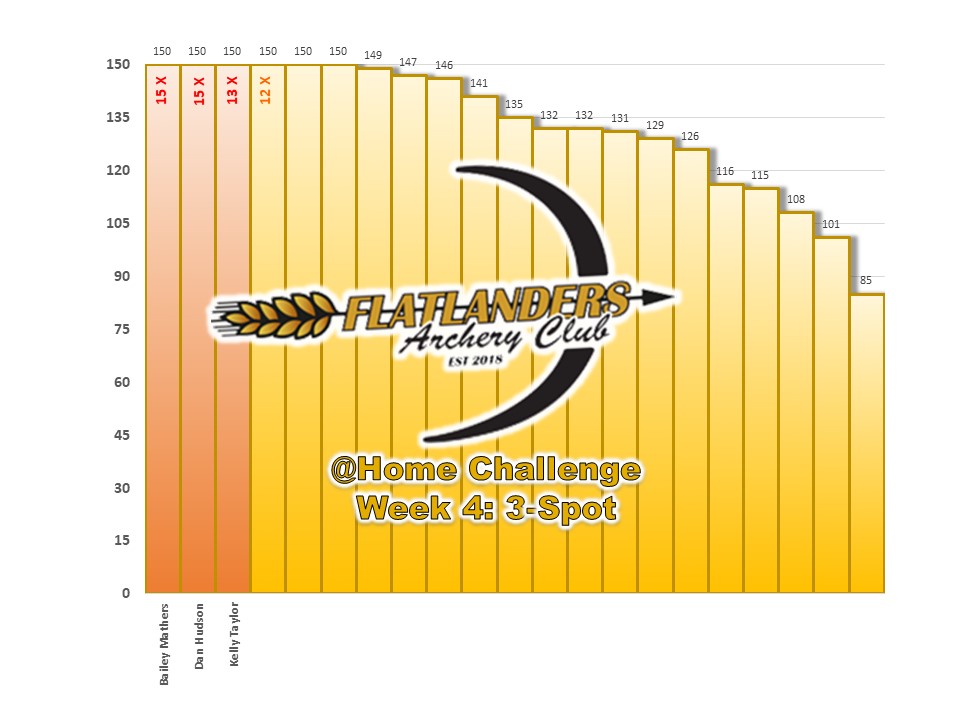 Week 4 scores for the Flatlanders @Home Challenge are now in!

The competition in this Week’s 3-Spot Challenge was pretty fierce with 6 archers scoring ‘150’.  It took a count of “x’s” to separate the pack of awesome archers.

Again, the Challenge Target was excessively difficult this week.  Chris Waterman (score ’32’) edged out Bailey Mathers (score ’30’) for third place.  Kelly Taylor came in second with a very respectable score of ’60’!  And Dave Cupples (First Place) took a couple of days off work and must have spent his hard earned vacation shooting lucky charms… I think he may still be going.  Let’s just say that he scored more than the rest of us combined!  Honourable mention this week goes out to recurver Sarah May who scored ‘8’ while the rest of the non-compounders barely emptied our quivers (other than Greg Rubel with ’24’)! 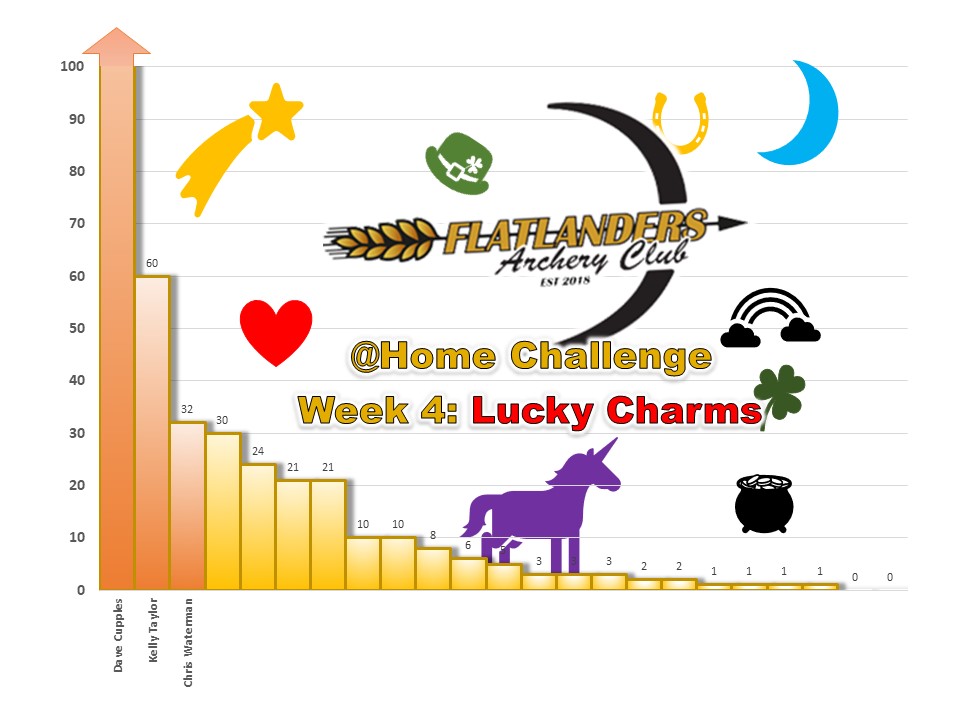 A ticket for each of the top 3 from each challenge will be entered into the draws (one draw for each Challenge).  Draws will occur at the end of the @Home Challenge.

Feel free to submit a barebow entry (in addition to compound) if you aren’t doing so already.

We have 2 weeks to go.  Feel free to invite others to take part, if even only for one week. 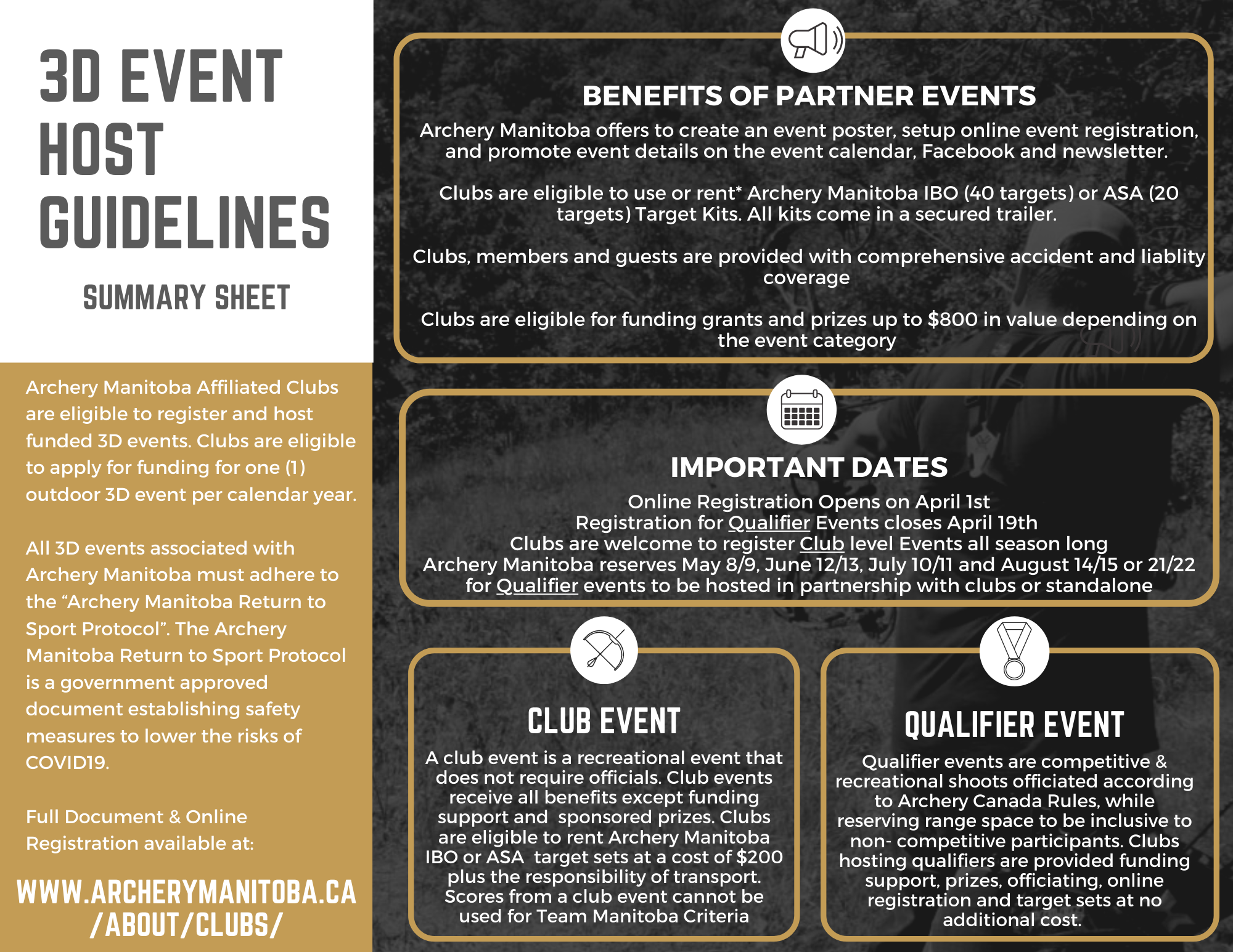 The 2021 3D Event Host guidelines are now available for clubs interested in hosting affiliated outdoor events in 2021. Archery Manitoba is proud to announce a partnership between Archery Canada and the Archery Shooter’s Association (ASA) this season offering a 20 Piece ASA Target set available for rent to partner clubs for registered shoots, as well as use at standalone Archery Manitoba 3D Shoots. Registration for 3D events opens on April 1st, 2021.

To access key documents for 3D clubs and events this season, please see the links below for more information or to register: 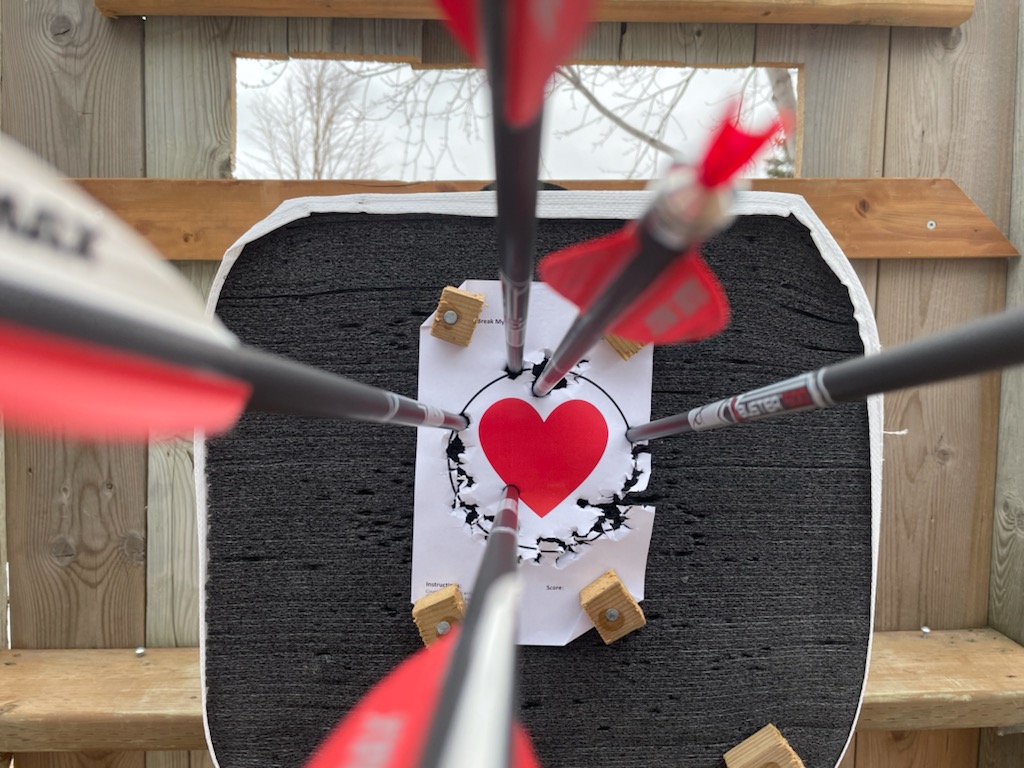 Top 3 in each of this weeks challenges are as follows: 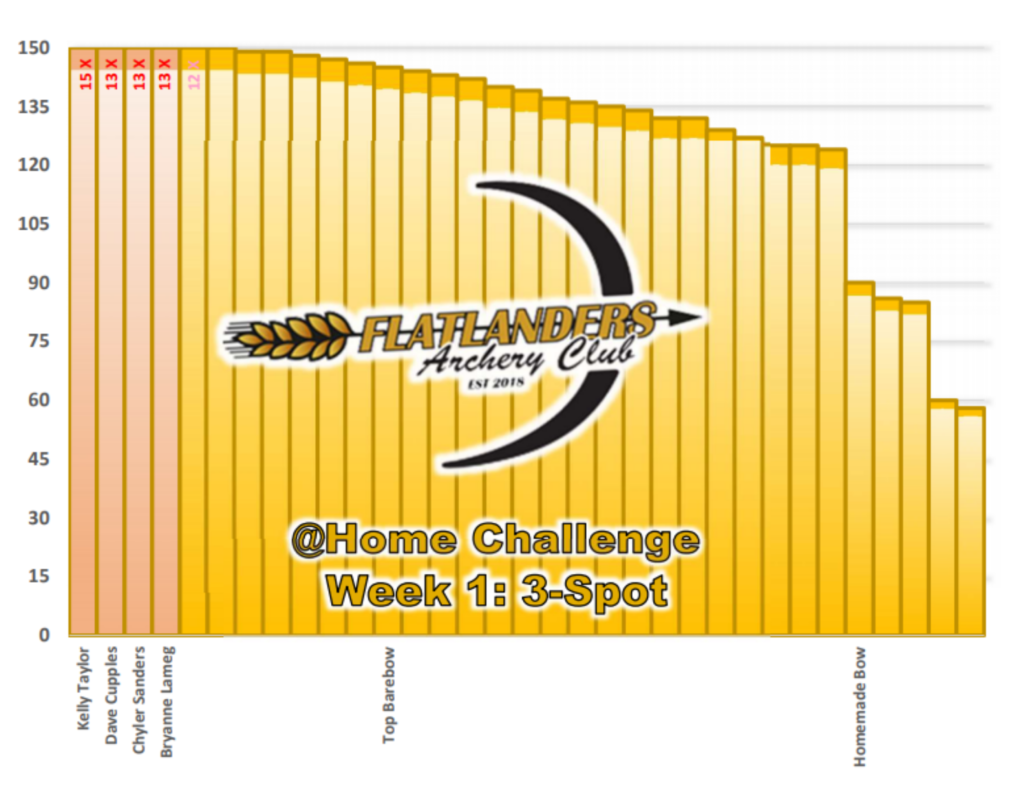 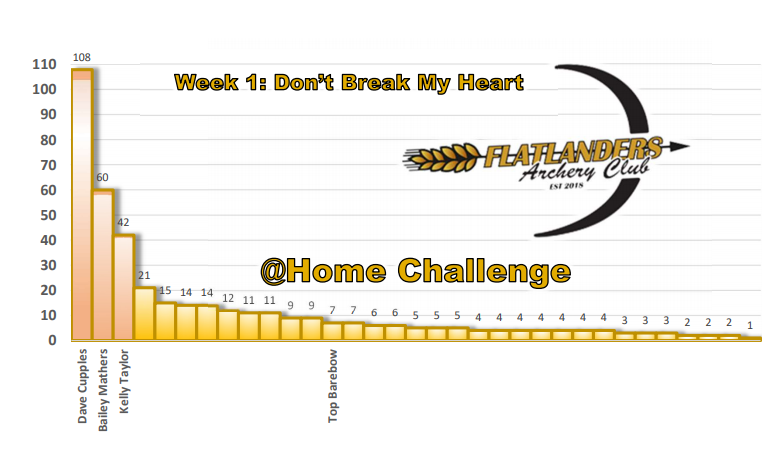 There will be a prize draw for the 3-Spot and Challenge events at the end of the 6-week challenge.

We are always looking for more participants and you don’t have to shoot every week in order to take part, or to win a prize.

Scores for Week 2 will be accepted until 7:00pm Wednesday March 10th.