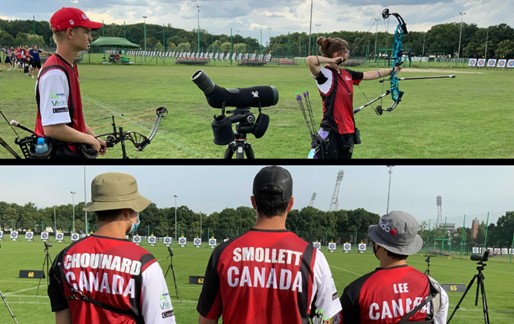 Wrocław, PL – The first day of the 2021 World Archery Youth Championships is over, with ranking rounds and the first elimination matches complete. The athletes reflected on their performances below.

Canada sent three junior recurve men to the event. Andrew Smollett (Calgary, AB) finished just 20 points off of the top 10 results with a score of 637. In the first round of eliminations, Smollett won the first set and tied the third, but unfortunately lost to Garcia Ruben of Mexico (3-7).

“I am happy with my performance in the qualifying round, this being my first major international event,” says Smollett. “I will bring this experience forward to prepare for future events.”

Benjamen Lee (Kitchener, ON) finished with a score of 608. Lee, who was facing some equipment challenges in the qualification and elimination rounds, then unfortunately lost to Kamenskyi Volodymyr from Ukraine (0-6).

“Although I am disappointed in my qualifying score, the shot execution I ended the day with is a shot I can trust,” noted Lee. “With deliberate practice, this shot will carry me through team matches.”

Jules Chouinard (Trois Rivières, QC) shot a score of 622. He shot a winning match against Dominykas Janciukas from Lithuania (6-0) and will now face 10th-ranked Rusin Artem from Russia. The three men combined for a team ranking of 14th place, an impressive finish for a team that has just come out of a pandemic without any international competition. They will compete against the 19th-placed Estonian team in the beginning of the bracket.

“I did not let my disappointing qualifying score interfere with my performance in matches,” says Chouinard. “Each day has its own unique challenges and tomorrow is another day.”

Over on the compound side, Chyler Sanders (Winnipeg, MB) finished her qualification round with a score of 638 and will face Julita Hankus from Poland. “Although I am disappointed in my score today, I will be prepared for matches tomorrow,” remarks Sanders.

Isaac Bedford (Williams Lake, BC) and Dustin Watson (Peterborough, ON) had only a few points between them, with scores of 685 and 681, respectively. In the first elimination round, Bedford will face off against Balaci Luis from Romania and Watson will compete against Miguel Rubio from Spain.

“I feel my qualifying score was what I expected and have been capable of,” says Watson. “I am excited about going into matches tomorrow.”

“The first half went well but I became unfocused during the second half and my performance dropped significantly,” remarks Bedford. “Going into matches, I know I need to work on focusing and to take it one arrow at a time.”

Brady Klassen (Winnipeg, MB) shot a score of 668 and will face off against Martin Antoine Marino Pinili of Hong Kong to start off bracket play in his division. The compound cadet mixed team consisting of Sanders and Klassen landed in 15th place, meaning they will face off against Poland in their first round.

“I was able to finish off today with strong consistent shots that will help me in tomorrow’s matches,” says Klassen. “I am the most comfortable I have ever felt in an international event.”

The competition will carry on tomorrow so be sure to check this link for updates: